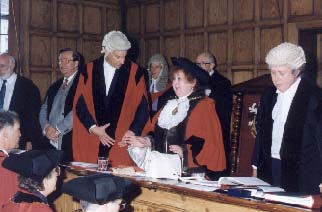 Note: I was planning to write an introduction to this page but since finding Peter Higginbotham's website I see no need. If you want to know more about the poor law, settlement law and the workhouses, then visit  www.workhouses.com

Sarah Shepherd (X) 29th Aug 1803
B.V.M.G.
On 28th July last, was delivered of f/b in the poorhouse, the father being John Strudwick, of  Artington, Surrey, a carpenter.

Eli Clark (X) 30th July 1805.
Was born in Liss, Hampshire, where his father lived, moving from there to Witley, Surrey. He received a certificate from Witley to live in H.T.G. When Eli Clark was about 15, the parish of Witley placed him as a servant to Mr Webb, of Milford, Surrey, without wages, but he was given clothes. On leaving Mr Webb, h/s to Joseph Hockley, attorney, of H.T.G. (4gns p.a.), staying there 2 yrs. He then h/s to Strudwick and Ogbourne, of S/by G. coach-masters, where he stayed for nearly 3 yrs.
Wife Mary.

On Jan 29th last, at the house of William Strudwick was delivered of f/b, the father being Stephen Wise, coachman, of Lynn, Norfolk.

Was born In Woking Surrey.

Was born in Woking, Surrey. About 6 yrs ago he rented a property in B.V.M.G. from John Peters (4/- weekly), the landlord paying the taxes. It was then sold to a Mr Silvester, and Strudwick agreed to rent it at £8 p.a. including a small counting house, and to pay the taxes. After 2 yrs Mr Silvester took away a small room and half the cellars, and reduced the rent to £7 p.a.

[Following entry not a Strudwick but I thought interesting all the same.]

Was born in S.N.G. on April 9th 1818, she married Thomas Leabourne at St Leonards church, Shoreditch. About a week before that, she took two un-furnished rooms at No 8 Queen Street, Hoxton Market, Shoreditch, (4/- weekly).About 14 months ago, her husband left her, and went to America.
George Thomas 2 yrs and 2 months.

About 1784, he took a tenement from John Peche, B.V.M.G.[£10 p.a.], staying there 6 yrs. Previously, at 14yrs old, he was ind. app. to John Edmonds, of St Georges, Hanover Square, London, for 7 yrs. When he came to Guildford, he was appointed ale-taster of the town. About 2 1/2 yrs ago, he went to Midhurst, Sussex, and was employed by Edward Gooden, collar-maker, for his keep and no wages.

Was born in Artington, Surrey. At 9 yrs, was ind. app. for 7 yrs by the parish officers of Witley, his father's parish, to Thomas Elliott, B.M.M.G. tailor. He stayed 4 yrs, then ran away.

Was born in Cranley, Surrey. At 16 yrs went to work for John Turner of H.T.G. common carrier, to drive the wagons. He stayed about 4 yrs, and was paid 4/- p.w. lodging with his father in S/by G. he then went to James Heath at the ''DOLPHIN'' public house, S/by G. for 9 months. He then h/s as carter to Sarah Strudwick, of Send, carrier, for 6 months at 4/- p.w. and 2 gns at the end of the year, driving the waggons to and from London.
Wife Leah.
ORDER OF REMOVAL TO STOKE by GUILDFORD.

After he left John Turner, he worked for Mrs Strudwick, carrier of Send, Surrey. He was asked if he was going to leave at the end of the year, but said he did not intend going, and John Stevens, Mrs Strudwick's fore-man said ''you suit me very well, and may as well stay a further year''. Sarah Strudwick died about 3 months before ladyday, and John Stevens continued the business. His father, George Tunnell, is settled in Bramley.

Is settled in Bramley, having h/s to Giles Evershed, farmer, of Bramley (10 gns p.a.). He married on leaving Mr Evershed, and George Tunnell is his son.