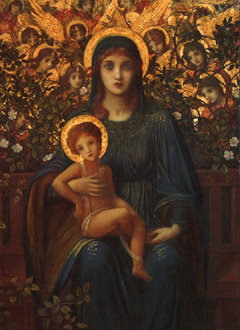 JOHN MELHUISH STRUDWICK
The Madonna and Child with attendant Angels


I am not quite sure how to put these records and indexes on the page. After much thought I have decided to put them in book order as I found them. It may make more sense than sorting them in date or name order at this time and at least this way, they are as I found them. It is up to the reader to conduct their own search, as one would if they consulted the registers and indexes one by one, as I have. The only drawback is the duplication between registers and indexes may make cross referencing a little confusing. I have found that the duplicates across registers always share a common reference so this should not be a problem. As the page grows I will try to put the information in an order that may make more sense. Also please bear in mind that this page is in development and may contain some errors.

Note: Messuage: Property law., A dwelling house together with its out buildings, curtilage, (meaning the land on and around) and the adjacent land appropriated to its use.
Relict: Archaic word for widow.

339. - JOHN MORINGE of Mowshill in par. of Witley, husbandman.
3 July, 40 Eliz. All to wife Alice Executrix who shall maintain a child who is in my house called Peter Strudwicke in such manner as I have compounded with the parishioners of WITLEY, my neighbours.
Overseers, John Burll and John Reede of Mowshill.
Witn. The Overseers.
Proved 6 Sept., 1598. [fo. 186.

* check spellings for jhone and jone.

To my son Thomas Raplie £100; To my son Edward Raplie £100; My eldest son Stephen Raplie to pay this when they reach 18 and if he refuses Thomas to have all freehold land and houses in Chiddingfold paying Edward £100 at 18 and Stephen £100 at 24; to my daughter Elizabeth Raplie £60 at 20; To my son Stephen a silver maser topped and footed with silver, six silver spoons, three jointed bedstead standards to the said home, a featherbed, a feather bolster now in the parlour, a coverlet, a pair of blankets, two cupboards, a joined table and form in the hall and a joined table in the parlour, a brass bell posnet, a brazen pestle and mortar, an iron bound chest and three other joined chests, an iron pot, two brass kettles, two iron kettles, three spits, two joined stools, two powdering troughs, three vats, three kivers, a kneading trough, two pothangers, six iron wedges and a grindstone that shall stay with my wife Agnes Raplie as long as she stays in house, residue to wife, exec.

To my daughter Dorothy Penicod £20 within 5 years; To my daughter Catherine Astone £20 at marriage; To my daughter Elizabeth Astone my house at Bookham in occupation of Robert Strudwicke and £10 at marriage; To my wife Margaret Astone a chamber fully furnished in my house that she thinks most fit; (Mr) Thomas Bradford of East Horsley exec. In trust to sell my land above the hill unbequeathed and my moveables to pay my debts and legacies and the surplus to my sons John Astone and George Astone equally.

Book numbers are those at the Greater London Record Office which is where I found these entries.


Index to wills proved in the Prerogative Court of Canterbury